Women have made great strides in Australia in the past two decades. In the spirit of Hans Rosling's assessment that the world is actually improving on most metrics (in spite of our negative expectations), we've identified locations that nurture women to achieve their goals. We tracked three broad goals that women may hold: education, career and motherhood. 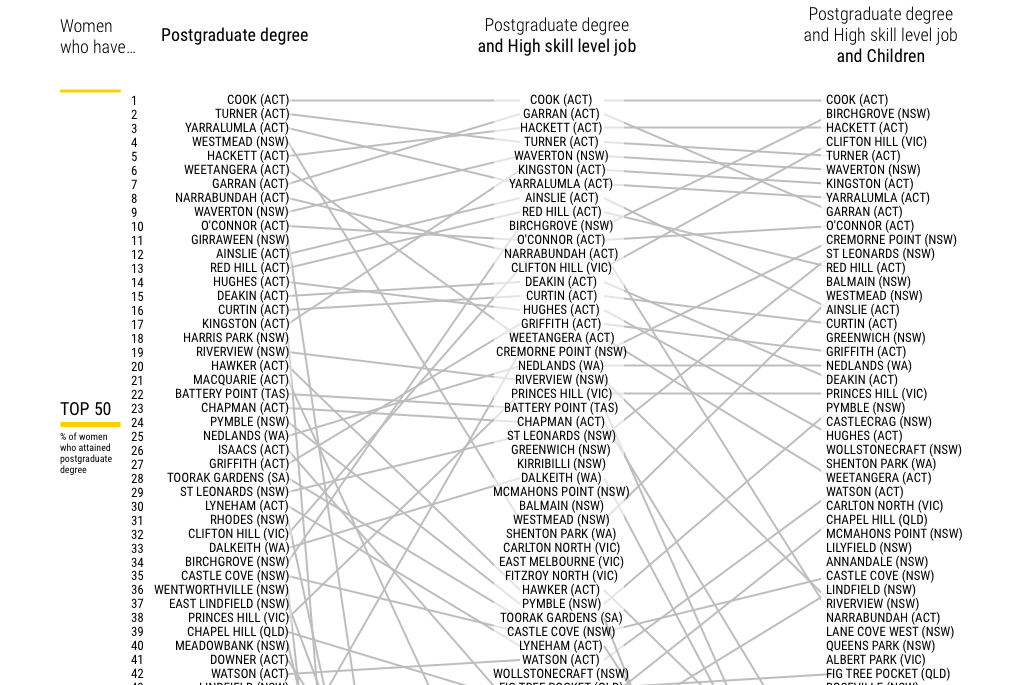 1. ACT suburbs are over-represented among areas where women have postgraduate level education, work in professional jobs, and also have children. (Figure 1)

3. High levels of postgraduate education in a suburb don't necessarily correlate with high numbers of skilled jobs. A number of suburbs in Western Sydney for example, including Girraween, Harris Park and Wentworthville rank highly for education, but drop off steeply when employment is added into the mix.

2. A number of suburbs exhibit a strong 'V-shaped' trend in the graph, that is their education levels and number of children is high, but high-skilled employment is lower relative to these. Many of these suburbs are on Sydney's Upper North Shore, including Waitara, Pymble, Killara, Warrawee and Gordon, as well as an area of Sydney's north stretching from Epping though Meadowbank down to Rhodes.

Click the ‘Next’ and ‘Previous’ buttons to see interesting insights from the suburb rankings. The rankings in the columns are cumulative, i.e.

The full interactive graph can be found here. It's fascinating but also very complex (don't try it on a mobile phone!)

The figures here are a snapshot in time, but stand in a broader context of rising education and skilled employment levels for women generally:

• There are more women than ever working in areas of projected employment growth such as professional, scientific and technical services. Growth in female employment is projected to continue outpacing that of male employment, for at least the next 5 years - Department of Education, Skills and Employment

We chose three datasets from the ABS Census that we felt best embodied the above observations. From the data, rankings of suburbs were generated from scores based on the percentage of women residents that match one, two or all three criteria.

Over the last year, we've been developing a tool to make sense of multi-dimensional data. In a nutshell, we wanted something that can both cluster things into groups based on similar characteristics, but also rank them in terms of all of the selected characteristics.

Making sense of the different balance between higher education levels, high-skilled employment and number of children among Australian women from different suburbs is a typical use-case for this tool.

The ranking process is demonstrated in the video below.