The Degree Chooser helps students understand the likely academic standard of the cohort embarking upon different degrees at Australian universities. It does this using data on the offers for places that have been previously made to Australian students based upon their percentile ranking in high school leaving examinations. 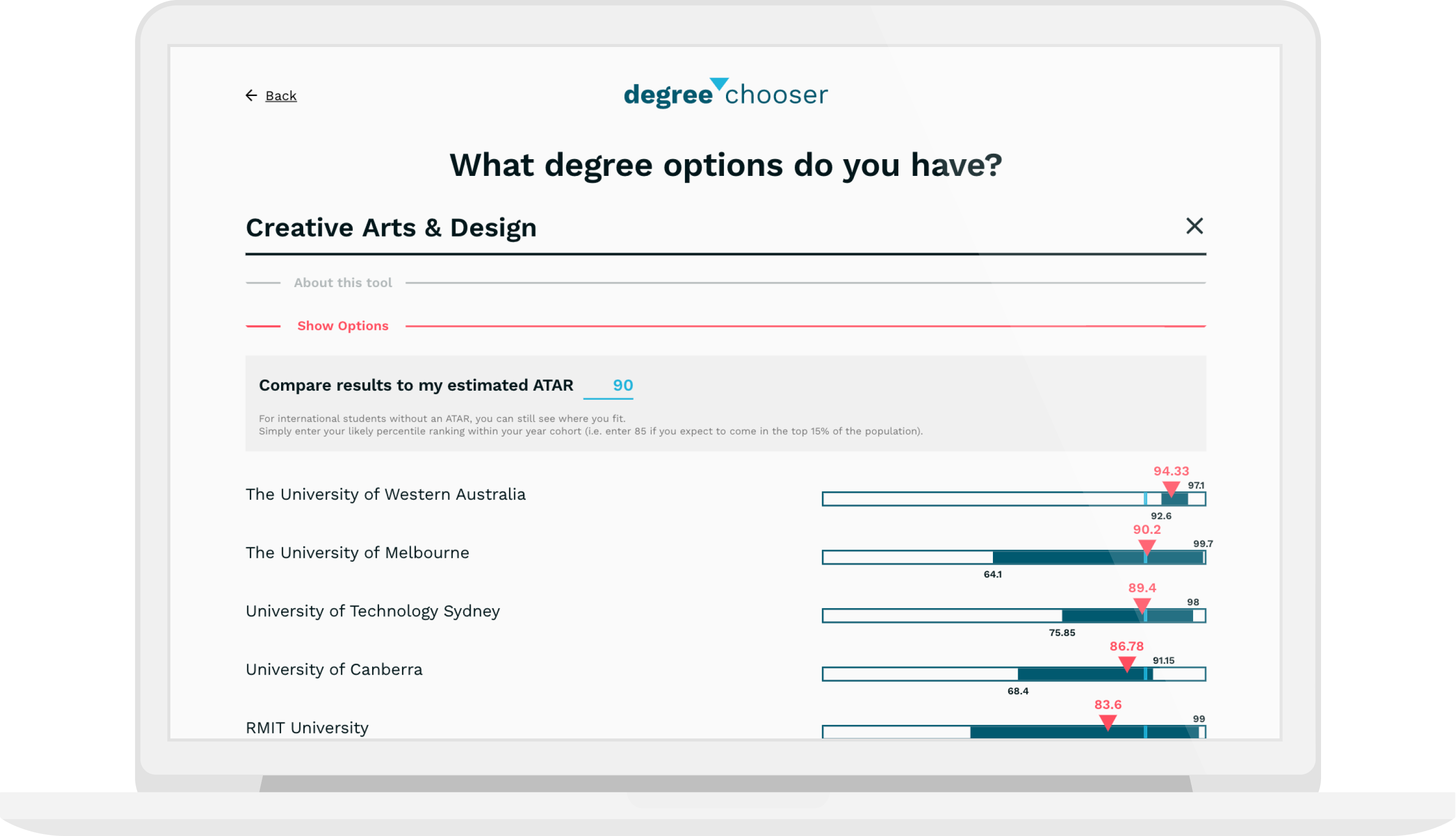 For prospective students, deciding on a university degree can be challenging. A range of factors comes into play, from entry requirements, to aspirations for graduate jobs, to living arrangements, to university rankings. In Australia, there are more than 3,000 courses to consider.

In 2020, matters have been made even more uncertain by the COVID-19 pandemic. Students have been dealing with disrupted study patterns, a shrinking of the casual employment market and, on many campuses, the suspension of face-to-face teaching.

The decision-making process is made even more difficult by a lack of centralised data and data analytics. Most universities and university’s admission centres publish information about the degrees on offer; however, this information is often lengthy, detailed and scattered across multiple webpages. Comparing and contrasting degrees across institutions can be confusing and time-consuming.

In response to these challenges, we collaborated with Barlow Advisory, an independent think tank which, since 2007, has published the Barlow Report, a biennial report used by Australian universities to make strategic decisions about research.

The result was Degree Chooser, a bespoke data visualisation tool with an easy-to-navigate user design interface that allows students to compare and contrast degrees across Australian universities—within seconds.

Where Barlow Advisory provided the concept and proprietary data, we provided multiple iterations and refinement of the concept, as well as researching and sourcing of additional data. Together, we worked on both data analytics and product development.

Out of this collaborative approach emerged a wealth of data covering a variety of degrees offered at Australia’s most popular universities. This data covers three issues central to every student’s decision-making process: 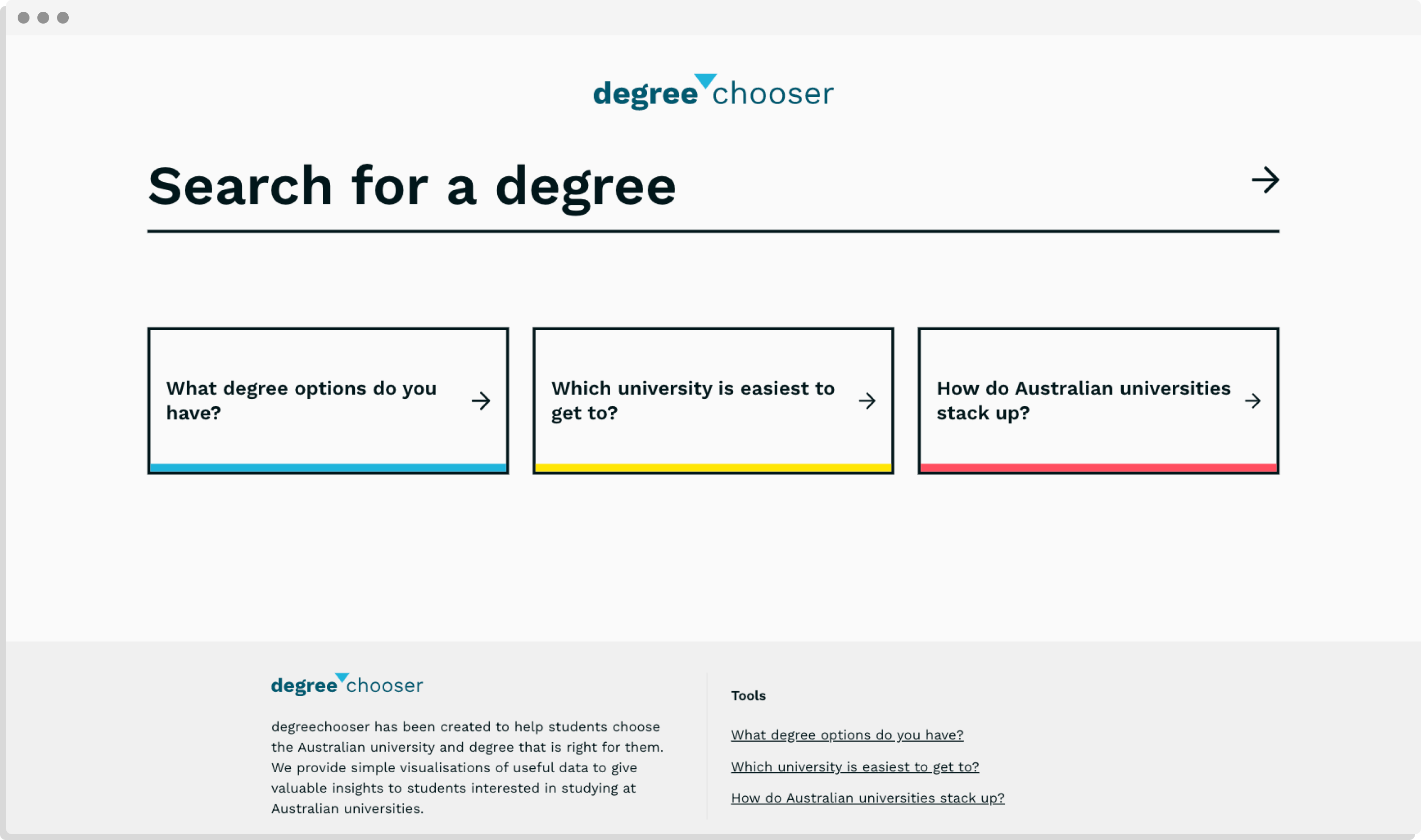 Choosing a degree by ATAR

The user experience begins with choosing an area of interest from more than 100 options, ranging from specific subjects, such as Aerospace Engineering, Biomedical Engineering and Interactive Design, to general ones, such as Arts, Science and International Studies.

Next, the user enters their ATAR (or expected ATAR). This generates a data visualisation of possible degrees, ranked according to likely ATAR required for admission—from highest to lowest. For every degree, the likely minimum, maximum and median ATAR are depicted, and the user’s ATAR is marked in relative position. This approach to data analytics enables the user to see, at a single glance, where they will likely gain a place, and where they likely will not. 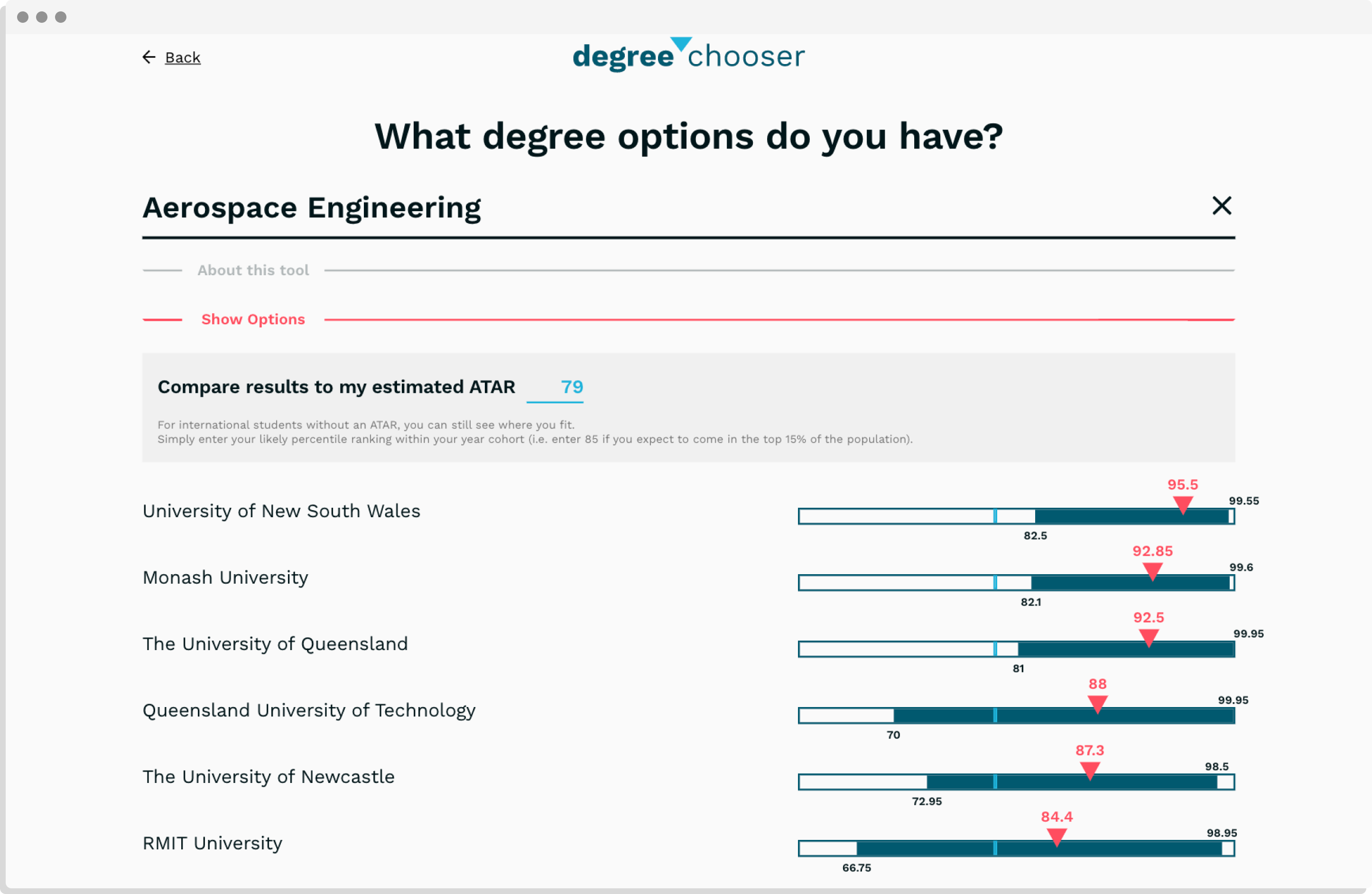 Choosing a degree by location

In addition to enabling a prospective student to compare and contrast degrees by likely ATAR, Degree Chooser enables the comparing and contrasting of universities by location–through simple data analytics.

The simple yet intelligent user interface design means that all the user has to do is enter their current or prospective suburb of residence. This generates a data visualisation with a list of universities, ranked according to proximity. For each university, the approximate time needed to travel—by walking, cycling, public transport and driving—is depicted. 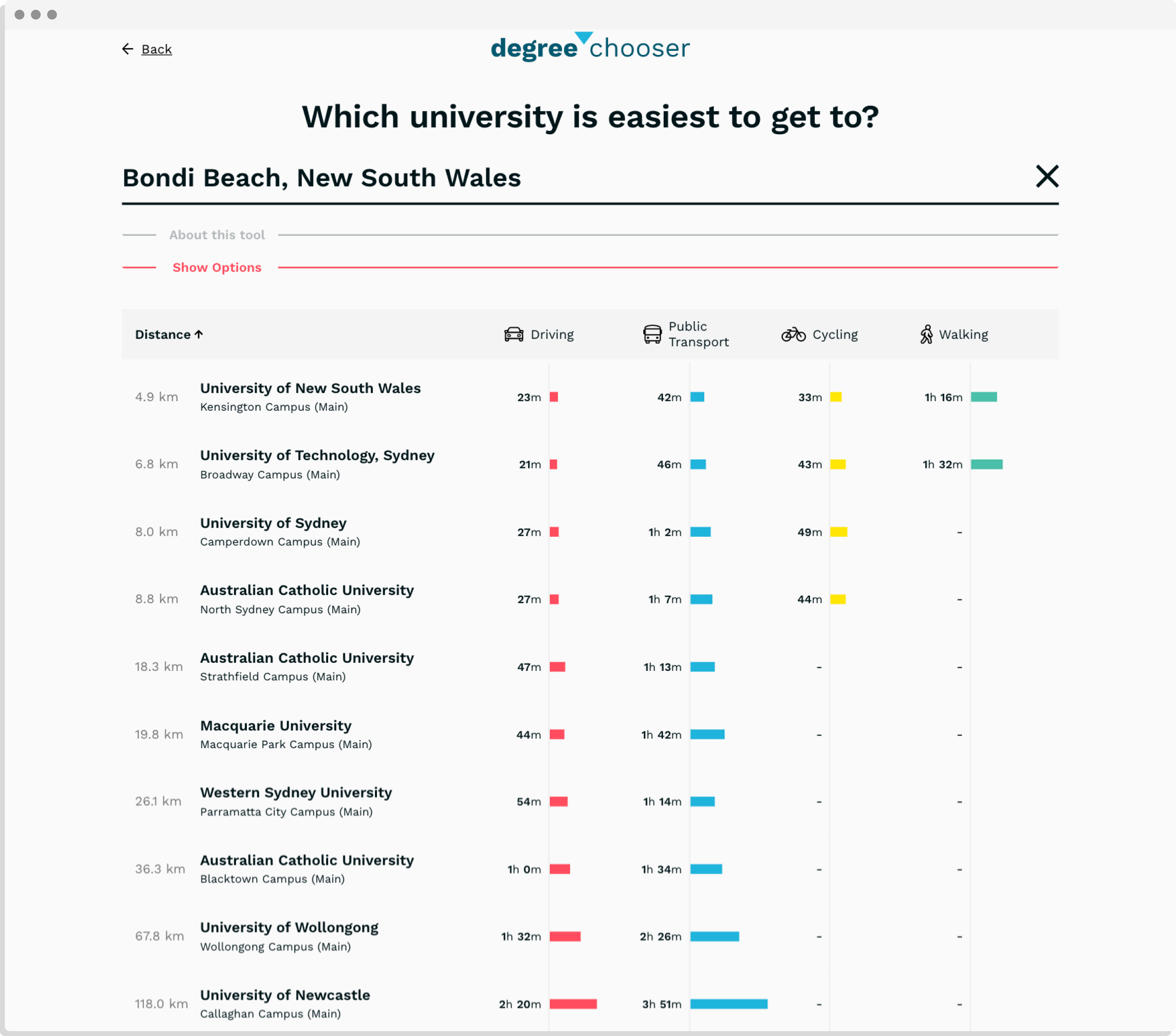 Choosing a degree by University ranking

36 universities are depicted, and the user interface design enables the user to see each listed according to their average position across these three university rankings, as well as by their position in each ranking. 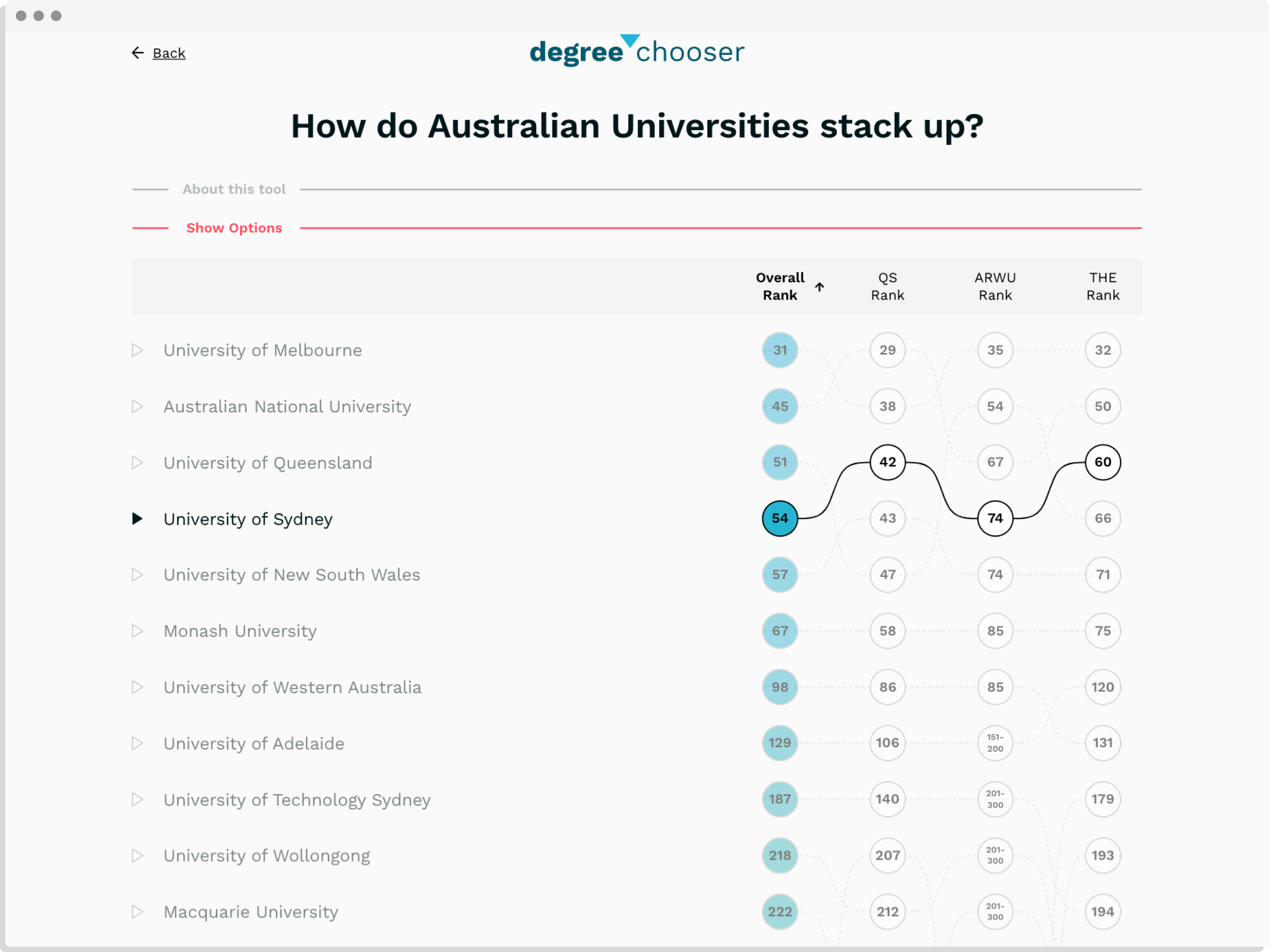 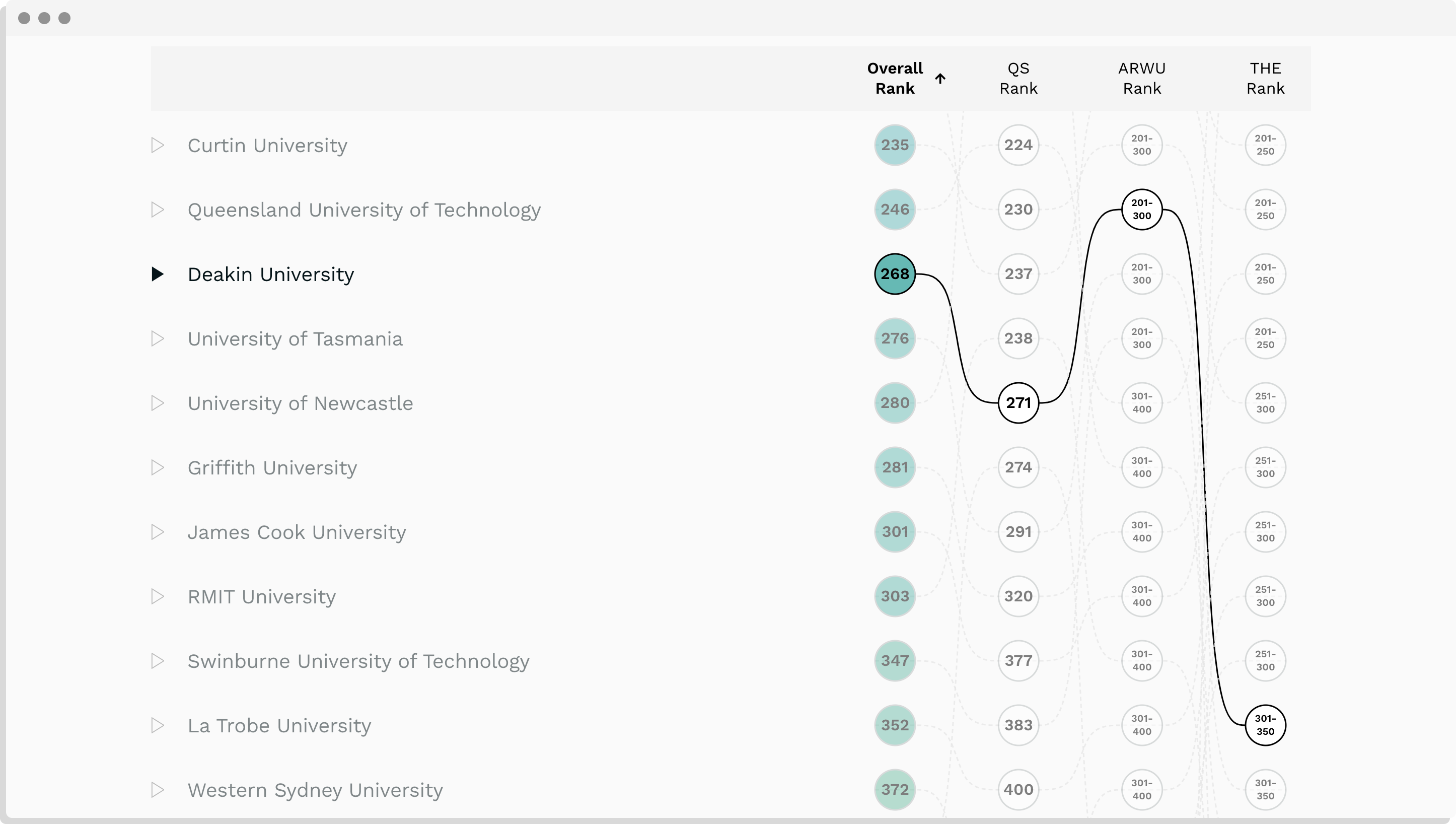 Degree Chooser is featured on the Universities Admissions Centre (UAC) website, where a direct link provides a seamless user experience for students making UAC applications. By clicking once, the user travels straight to Degree Chooser, where they can access clear, centralised, well-presented data about UAC courses, to help inform their decisions about UAC preferences.

Further, the Degree Chooser data visualisation tool sits on its own unique website, so it is available to everyone at every stage of the UAC application process—from initial UAC offers to final UAC rounds.