Explore our insights from City2Surf 2018, including most common finish time, start group, age and performance. Did you know that Heartbreak Hill slows runners down by 8.5% or that over 1,500 people participated more than 10 times?
Author
Martin von Lupin
Date
August 2018 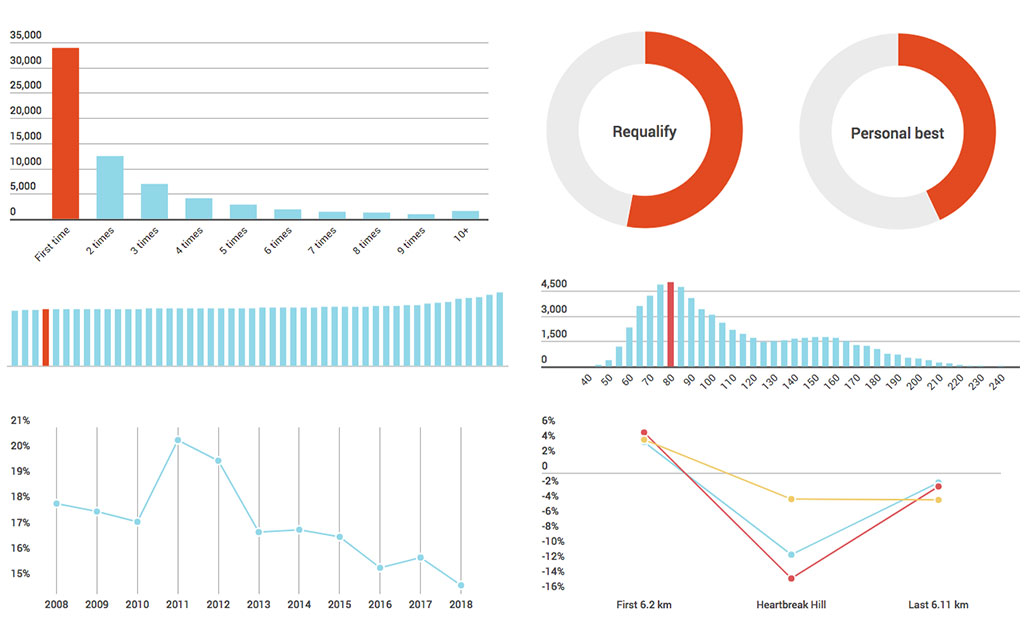 After running the City2Surf for the first time in 2018, I was left wondering about my performance when finishing the race. I ran in the Red start group and was more than 2 minutes short to re-qualify for next year. Heartbreak Hill hit me harder than expected. I wondered how my achievements compared to other runners. So it was time to crunch some numbers! Similar to 2017 I analysed the results that are published on the official website.

Here are my top 10 insights:

1. Most runners are first timers

The City2Surf is one of the world's largest fun runs with around 80,000 registrations every year. While most participants in 2018 ran for the first time (33,957 runners, 50.5%) there was also a huge crowd of regulars who had previously participated*.

Finish times span from 41 minutes to more than 4 hours. This is because City2Surf attracts both competitive runners and casual walkers. The most common finish time across all participants is between 80 and 85 minutes. That's a remarkable performance considering the intensity of the course. The trend is different when looking at each gender. Most common finish time for women is 85-90 minutes, while men finish in 75-80 minutes.

4. The Blue start group is the largest

The Blue start group makes for the largest group containing over 22,000 runners in 2018. It is the first group that does not require a qualifying time. The Green, Red and, of course, the Seeded group, require pre-qualification times. Significantly more runners (79%) choose to run in groups that don't require pre-qualification like Blue, Orange or Yellow. 2018 was the first year that offered the Platinum pass. Participants of that group could run in any of the coloured groups.

5. Just over half re-qualify for their start group

SMALL MULTIPLES | City2Surf 2018: Just more than half requalify for their start group | Download graphic as JPG

Pre-qualification is required to be eligible to run in either the Seeded, Red or Blue start groups. 53% met their qualification time in 2018. That leaves 47% not being able to reapply for the same group using this year's result. Broken down by start group that's: 33% of Seeded, 18% of Red and 54% of Blue. These statistics don't include Platinum runners.

Those statistics differ when differentiating by finish time. We encountered different performance characteristics for the groups that have finish times of 41-90 minutes, 90-130 minutes and over. The chart above and table below show variations in paces for each of the three course sections compared to the average pace by finish time group. We also created a conversion table that shows how those numbers translate to actual paces and finish times.

SMALL MULTIPLES | City2Surf 2018: Most runners are between 20-39 years old | Download graphic as JPG

The most common age groups among all genders are 20-29 and 30-39. That's actually not a mind-blowing insight. What is more interesting is the fact that there are still quite a few runners that are older than that. There are 3,258 participants who are 60+. Big kudos to the 86 champions who are 80+ years old! Statistics exclude 130 finishers who didn't specify their age.

Many people register for the race but don't show up on race day or don't make it to the finish line for various reasons. However, the number of people who register and don't finish seems to be going down in the last 10 years. In 2018, only 14.8% didn't finish. This is a significant decrease compared to 20.5% in 2011.

10. Ellie Pashley was one of the fastest women ever

The female winner, Ellie Pashley, finished the race after 46 minutes and 21 seconds, which was the 4th fastest time for a woman ever. The female race record was set in 2001 by Susie Power (45:08).

SMALL MULTIPLES | City2Surf 2018: Ellie Pashley was one of the fastest women in history - 4th fastest woman ever | Download graphic as JPG

Data downloaded from official results page on 20 August 2018. Splits for segments downloaded on 21 August and personal runner histories on 27 August.
Winner finish times taken from Wikipedia for years 1971-2018. * Not considering races before year 2000.

For any comments or questions about the data or graphics please write an e-mail to martin@small.mu.

Have a question for Small Multiples? Want to work with us (or for us?). Get in contact.